BREAKING NEWS
GMT+2 05:25
Home BREAKING NEWS If You Are Not Corrupt, You Won’t Run Away–Amidu

If You Are Not Corrupt, You Won’t Run Away–Amidu 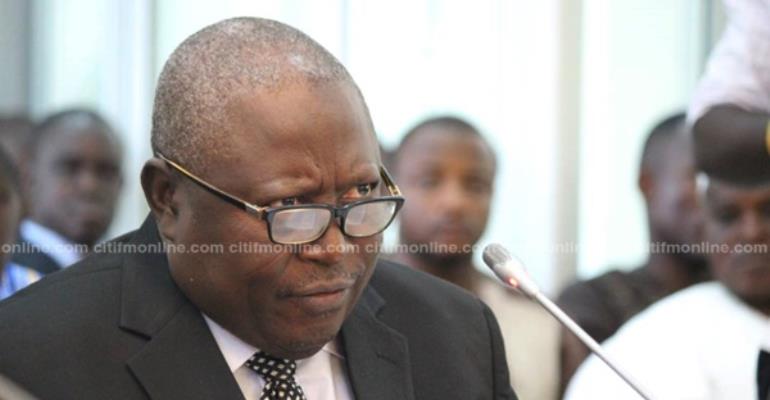 Yet-to-be sworn-in Special Prosecutor, Martin A.B.K. Amidu has stated that public officials in the current and previous administrations do not have to go into hiding if they have not engaged in corruption or any corruption-related activities.

“There is no need for any citizen to go into exile as some are alleged to have done, or to contemplate or fear my approval and pending appointment as Special Prosecutor, so long as that citizen has not seriously violated any law worth investigating or prosecuting in the national interest under my remit,” Amidu said in his latest write-up .

According to him, his job is to protect the 1992 Constitution which includes protection “from capricious exercise of discretion and I will ensure strict compliance with the letter and spirit of the 1992 Constitution in protecting the citizen’s rights and as well as any abuse of the public purse.”

Martin Amidu was vetted by the Appointments Committee on February 15, 2018; an assessment exercise that lasted over 7 hours .

Mr. Amidu’s public vetting received widespread commendation as many stakeholders believed he performed creditably, and he has since been approved by Parliament as the nation’s first Special Prosecutor .

Already some suggestions have been made to the Special Prosecutor as to which corruption issues he should tackle first.

President of policy think tank, IMANI Africa advised Amidu focus on plugging the leakages in the revenue of government machinery .

“…If we are looking at the office of the government machinery for instance in the last 12 years, you would see consistently that it has been the most wasteful and actually the source of corruption as well. That is why we are saying that if you want to fight corruption, let’s start from the office of government machinery because they put up all these portfolio of agencies that are duplicatory and not needed,” he added on Citi FM‘s news analysis programme, The Big Issue last Saturday.

Mr. Kpebu has advised the Special Prosecutor to start from those cases because “there is an abundance of evidence or sufficient evidence to prosecute.”

Below is the Mr. Amidu’s recent epistle:

My parting thoughts as citizen vigilante
The right to criticize a fellow citizen, however vigorous, cannot be defamatory of that citizen or even in contempt of court when it is kept within the limits of reasonable courtesy and good faith. As Lord Justice Salmon said in R v Metropolitan Police Commissioner; Ex Parte Blackburn at pages 155-156:

“…The criticism here complained of, however rumbustious, however wide the mark, whether expressed in good taste or in bad taste, seems to me to be well within limits.”

It is in this spirit that I have taken comments and criticism arising from my responses to the Appointments Committee of Parliament at my approval public hearing on 13th February 2018. Since I met the President on 9th January 2018 for a nomination confirmation discussion and accepted the potential nomination for consideration for approval by Parliament, I considered myself a potential public servant and stopped my citizen’s constitutional defence activism under Article 3 of the Constitution by not responding to unconstitutional comments and criticisms about my constitutionally mandated activities. As I put it at my approval public hearing, the nomination gagged me from speaking or writing in the press as a private citizen would.

From the moment I take my oath of office, I will be a quasi-judicial officer enjoined to act impartially and independently in the execution of my duties. My voluntary acceptance to be appointed Special Prosecutor imposes upon me strict compliance with the Code of Conduct and Ethics of the legal profession in which I am viewed as an officer of the court, whether in or outside the court room while I remain in office. In view of my acceptance, there will of necessity be a change in the way I will exercise the plentitude of my cherished rights as a citizen in accordance with Article 3 of the Constitution.

Before then I wish to say my response at my approval public hearing that some of my articles are based on my perceptions and opinions does not mean that they were not based on fact or reality. An in-depth acquaintance with the Philosophy and Methods of Research will show that perceptions and opinions need not be based on conjecture or non-facts or illusion. Those learned in research methods and intelligence know that my answers were intended for the protection of my sources and collection methods giving rise to the conclusions I arrived at in my several articles on corruption and abuse of power for private gain.

Article 3 of the 1992 Constitution would be hopeless if constitutional activists could not protect their sources and collection methods of information disclosing breaches of the Constitution and suspected commission of crime, and in particular corruption offences. I could not have given facts of corruption allegations in my articles to a partisan questioner without revealing or naming my informants and other sources and collection methods as a Citizen Vigilante.

I am writing these parting thoughts because the hearing was widely publicized, and many viewers and readers may not be well versed in the philosophy of research, research methodology, security and intelligence studies, and conflict resolution studies. It is therefore important to dispel in the matter of the debate whether perceptions and opinions are necessarily based on only speculation, or illusion or non-reality or non-fact.

These parting thoughts are in recognition of the fact that as a quasi-judicial officer, after my appointment I will have to behave as a justice of the superior court will do and will henceforth be unable to answer to several unfounded criticisms. I would have to adhere to the admonition of Lord Atkin in delivering the judgment of the court in Ambard v Attorney General [1936] AC 322 when he stated at page 335 that:

“The path of criticism is a public way: the wrong headed are permitted to err therein: provided that members of the public abstain from imputing motives to those taking part in the administration of justice… Justice is a cloistered virtue: she must be allowed to suffer the scrutiny and respectful, even though outspoken, comments of ordinary men.”

“It is the right of every man, in Parliament or out of it, in the Press or over broadcast, to make fair comment, even outspoken comment, on matters of public interest. Those who comment can deal faithfully with all that is done in a court of justice. They can say that we are mistaken, and our decisions are erroneous, whether they are subject to appeal or not. All we would ask is that those who criticize us will remember that, from the nature of our office, we cannot reply to their criticisms. We cannot enter into public controversy. Still less into political controversy. We must rely on our conduct itself to be its own vindication.

Exposed as we are to the winds of criticism, nothing which is said by this person or that, nothing which is written by this pen or that, will deter us from doing what we believe is right; nor, I would add, from saying what the occasion requires, provided that it is pertinent to the matter in hand. Silence is not an option when things are ill done.” (For the words “a court of justice” substitute the words “the Office of the Special Prosecutor”.)

There is no need for any citizen to go into exile as some are alleged to have done, or to contemplate or fear my approval and pending appointment as Special Prosecutor, so long as that citizen has not seriously violated any law worth investigating or prosecuting in the national interest under my remit. The 1992 Constitution protects every citizen from capricious exercise of discretion and I will ensure strict compliance with the letter and spirit of the 1992 Constitution in protecting the citizen’s rights and as well as any abuse of the public purse.

Author: Martin A. B. K. Amidu
–
By: Godwin Akweiteh Allotey/citifmonline.com/Ghana
Follow @AlloteyGodwin
The post Don’t run away if you are not corrupt – Martin Amidu appeared first on Ghana News