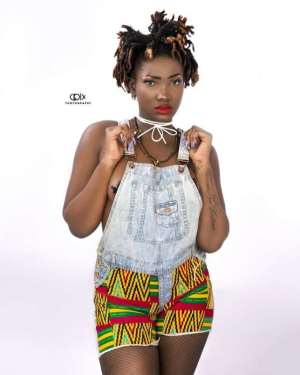 The latest information has it that Ebony, a day before her fatal accident, had informed her managers that she was visiting the Northern Region.

This new information is in sharp contrast to what is already known that Ebony had purposely traveled to visit her mother in the Brong Ahafo Region before her death.

Allen Kofi Anti, Deputy Manager of Ruff Town Records, Ebony’s record label, made this revelation in an interview on GHONE.

According to Allen, on Wednesday, February 7, 2018, Ebony had called him on the phone in the evening informing him of her journey to the North.

Allen said that he tried to persuade her not to go on that trip because it was late but she wouldn’t budge, and simply said to him “Don’t worry, I will be fine.”

According to him, on her way to the North, Kaywa, a sound engineer who claimed to have predicted Ebony’s death, also called her on the phone and warned her to return home but Ebony ignored him too and had her way.

Bullet, her manager, added that Ebony became so powerful that whenever she wanted something, nothing could stop her.

Therefore, though Allen had informed him of Ebony’s decision to visit the North at that odd hour, he could barely do anything about it, especially when he was out of Ghana.

According to the two managers, Kaywa had told them many months ago of an impending accident ahead of Ebony.

He had also given them some directions to take to avert that calamity and they heeded. Therefore, for Ebony to ignore Kaywa’s warning on her way to the North is something serious, the managers said.

Their revelation also suggests that Ebony had actually visited the Northern Region a day before her death for a reason no one knows till now.

It was when she was returning from the North that she made a brief stop at her mother’s house in Sunyani.

Meanwhile, the managers have also disclosed that they have no idea about Ebony’s many tattoos, including her choice for designs and shape.

They also disclosed that contrary to claims by Ebony’s father that the soldier, Lance Corporal Vondee Francis Atsu, who died with Ebony, was her bodyguard, they never knew of it.

They didn’t know the driver either, but only Franky Kuri, her personal assistant.

Ebony’s one week observance has been slated for Sunday, February 18, 2018.