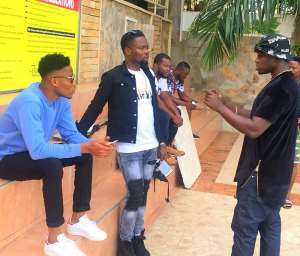 The Ghanaian sensational up and coming musician and carry me away hitmaker KD Bakes was spotted a few days ago with the celebrated video director, Lex McCarthy in what is suggested a music video for a featured track.

Upon a zoom-in look at the suggested video scene, one can’t but cross his fingers in a terrific anticipation of the full visuals.

Looking at the energy, creativity and sumptuous vibes laid on display by KD Bakes at the scene, this is a strong pronouncement of his level of artistry in the game. What he brings to the table cannot be overlooked for he’s got that legendary touch.

KD was recently in Sought Africa to shoot music videos for collaborative songs with an SA artiste.

A few weeks ago, the singer released a very anticipated tune which has been topping a lot of music charts and getting aficionados of good music hooked with the recent one by superstar Fancy Gadam.

From where I sit, the young act clearly understands what he does. And the maturity to which he attaches to this work of art is something on a golden platter.

Let us wait for the release of the projects but until then, endeavor to follow the artiste on all social media platforms for timely updates.

A 2018 submission, According to Felix G – Yhakubu