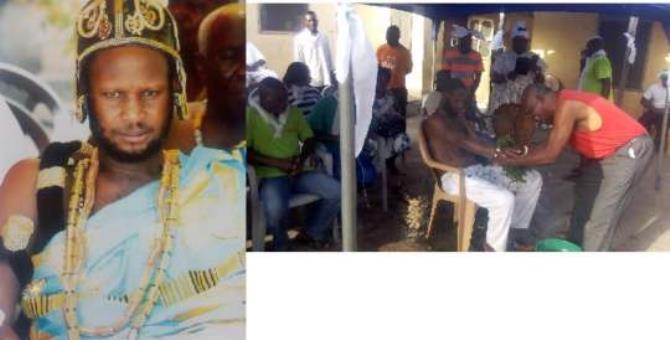 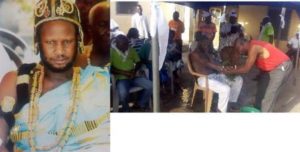 By Kodjo Adams, GNA
Accra, Nov. 11, GNA – The kingmakers of the three gates of Nii Klu Din We, Nii Adjei Okon and Nii Okang Duamro and Principal elder of Nii Nmai have confirmed Jonathan Adjetey Adjei as the Mankralo of Teshie with the stool name Nii Okang Duamro Nmashie III.

This was contained in a letter signed by the head of the family of the three gates to the Registrar of the Greater Accra Regional House of Chiefs in Dodowa dated October 10, 2016 and copied to the Ghana News Agency in Accra.

Nii Adjetey Otinkorang I, who is also the Dzasetse of Nuumo Nmashie Family of Krobo Teshie, on Thursday performed the cleansing rites on Nii Okang Duamro III to affirm him as the Mankralo of Teshie, and this was witnessed by the elders and youth of the community.

Nii Okang Duamro III, who spoke to the Ghana News Agency on his vision for the community, promised to unite the people of Teshie under one umbrella since peace and unity was critical in utilizing the potential of human resource and infrastructural development.

‘This can only be achieved with effective mobilization of all groups within the area through a well-coordinated administration to meet the plans and desires of the people,’ he said.

He said some areas within Teshie lacked development because of the feuds, making it difficult for government or any organisations to pay compensation for any developmental projects being undertaken in the area.

He called on all to come on board to develop the area devoid of violence saying he would use his position to ensure that there is peace and understanding among the community and appeal to the youth to eschew any activities that would endanger the lives of people ahead of the December polls.

Nii Otinkorang I said in 2012 the kingmakers of Teshie installed Nii Nmashie III and he was duly introduced to the Teshie Traditional Council.

He said Tsitsi-tse Nii Okang Duamro Nmashie IV, known in private life as Benjamin Nii Nmai Sam Sowah, was later outdoored as the new Mankralo of Teshie, which he explained does not qualify to be a Mankralo of Teshie, and this resulted in confusion in the area.

Nii Otinkorang I said as a result of the mayhem, an Accra Circuit Court Presided by Francis Obiri on Wednesday April 30 restrained the Kingmakers of Teshie to stop the outdooring of Mr Benjamin Nmai Sam-Sowah to avoid violence in the area.

This follows an ex-parte motion for an order to stop the outdooring of the new Mankralo filed by the Police with a supporting letter from the Greater Accra Regional House of Chiefs.

He said Chief Inspector K. Adu told the court that the elders of Teshie has not nominated or selected Mr Benjamin Nmai Sam-Sowah as the Mankralo of the area.

Nii Otinkorang I said the case before the Regional House of Chief at Dodowa and a facts finding committee was set up for arbitration.

He said the Committee established that the position of Mankralo rotates among the three gates and that Nii Klu Din We, one of the three gates has eight houses of the Krobo Quarter namely Nii Okoh Gate, Nii Okang Gate, Nii Nmai Gate, Nii Ashia Gate and Nii Botwe Gate.

The Committee established that the stool is a patrilineal inheritance.

Nana Odupon Okomfo Abeka Sikafo II, National President of Greater Accra Traditional Priests and Priestesses Council, has pledged their support for the confirmation of the Mankralo, adding that “in their traditional setting if a Dzasetse performs the necessary rites on a Mankralo, then it means the right thing has been done”.

He said the Council will work with the Mankralo to succeed, and hope to put in place youthful policies that will help develop the area.