Kojo Antwi Should Be The Next MUSIGA President – Frank Mensah Pozo 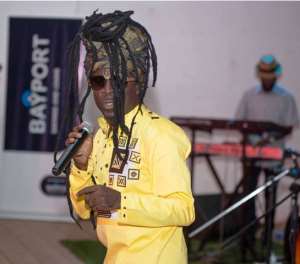 Highlife musician, Frank Mensah Pozo has called on the Maestro-Kojo Antwi to contest for the President of the Musicians Union of Ghana (MUSIGA) in the next election.

He was hopeful that Kojo Antwi can do what Bice Osei Kuffour (Obour) couldn’t do if elected as the next President of the Union.

Frank Mensah Pozo made the appeal in an interview with DJ Murphy Lee on Bohye FM in Kumasi.

According him, Gyedu-Blay Ambolley will be another good choice if Kojo Antwi does not show interest in the position.

He indicated that the current President of MUSIGA, Obour did what he could do—but it was not enough.

“Obour has done well. I will rate him 40 over 100 percent. As a human being you cannot do everything.He should have concentrated on the welfare of musicians.”

“Most of the aged musicians are sick.Most veteran musicians have a lot of albums but they are not reaping from their hard works. I do not think that would happen in Nigeria, Togo or Single.”

“I won’t mention USA because it is far. We form a union or an association all because of help. If they are not benefiting from it then what is the essence of it,” Pozo said.

“Everything was centered at Accra. We have musicians across the country so everybody should have an equal benefit and opportunity,” Frank Mensah Pozo added.