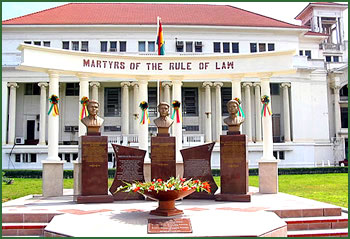 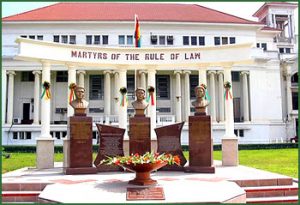 OccupyGhana has learnt of the Ruling of the Supreme Court dated 16th November 2016, granting Mr. Martin Amidu leave to examine Alfred Woyome as to his means, with a view to making those means and assets available for enforcement.

OccupyGhana salutes the Honourable Court for this fantastic Ruling and Mr. Amidu for not giving up the fight for Ghana to recover its monies from Woyome.

This Ruling is refreshing because it comes against the background of some shameful responses to Mr. Amidu’s sterling work, from our government and its surrogates, and we would want to address those now.
The Amaliba Tale

First, we read the news story on www.myjoyonline.com where one Abraham Amaliba Esq., claimed that the Attorney-General was still pursuing the money wrongfully paid to Woyome. Amaliba, whom we know to be a lawyer in private practice and a spokesman for the NDC, and who does not work with or speak for the Attorney-General, was reported to have said as follows: “What happened was that when the application was filed, Woyome wrote to the A-G that he was prepared to pay and the case was withdrawn”, adding the two are scheduled to meet on the next Monday.

This could not have been true. But if it was true, then that sparse statement contained enough to give Ghanaians even more cause for concern, especially so when the President, on the night of 16th November 2016 on Ghana Television’s Encounter with him repeated the same patently false statement.

An application is said to be made ‘ex parte’ when it is taken for granted without notice to, or contest by, any person adversely interested. Thus, no formal notice of the application was served on Woyome. He could therefore not have known about the application, unless, once again, there are serious leaks in the AG’s Department.

We recall that it came out in the trial of Woyome (when he was acquitted), that internal documents created in the AG’s Department were leaked to Woyome by persons working within that Department, and Woyome gleefully tendered those documents in court, leading in part to his acquittal.

Thus, if what Amaliba said was true, then we are in worse trouble than we first thought.
But we are prepared to give Amaliba the benefit of the doubt and assume that he probably meant the “order” of the court and not the “application”. But that only makes the matter even worse.

Because what Amaliba said further, and which we found also troubling was that once Woyome (or his lawyers) wrote to say he was prepared to pay, a decision was immediately made to discontinue the entire process. We recall that Woyome had at least once made such an empty promise before the Supreme Court. However, he was yet to voluntarily pay a pesewa as at that date. All his known assets suddenly bore the names of other persons. And there was literally no money in his accounts. The entire GH?51M appear to have vanished.

We therefore, found it shocking that the AG would take the drastic step of seeking to discontinue such a far-reaching process simply because Woyome wrote a letter, making promises that are not worth their weight in gravel.

And there was more. Mr. Amaliba said Woyome and the AG were to meet on the following Monday. We wondered, “for what?” That meant all the AG had in her hands and which harried and hurried her into taking that step and vain attempt to block the latest enforcement procedure, was a mere letter. There didn’t appear to be any agreements on when the money will be paid, and that is why the two were scheduled to meet again.

Our continued analysis of Amaliba’s – and later the President’s – statement and unfolding events made us realise how untruthful both statements were, and betrayed that we were in really big trouble with those pretending to be leading our side of the recovery effort.

This realization was made more complete when we finally saw a copy of the letter that Woyome’s lawyer, in the words of Amaliba, “wrote to the A-G”. That letter is dated 27th October 2016, and was received by the AG’s office on that date. It contained no concrete repayment plan or proposal: No figures, no dates for payment, nothing, but the bare statement that “our client has a clear intention to pay.”

That letter also mentioned two events or meetings towards repayment on 12th and 15th February 2016. It betrays the fact that no other meetings were held or communications existed, between the AG and Woyome after the Supreme Court order was obtained.

Secondly, on Saturday 12th November 2016, we listened to and watched Communications Minister, Dr. Edward Omane-Boamah on JoyFM’s Newsfile programme, insulting and spewing all kinds of invectives at Mr. Amidu. That was unfortunate and regrettable. Mr. Amidu has given Omane-Boamah a response. However, one particular claim caught our attention.

Omane-Boamah claimed that the AG had commenced investigations into the actions of the lawyer Nerquaye-Tetteh, whose wife is reported to have somehow earned GHS400,000 from Woyome, after Woyome was paid. Note that Nerquaye-Tetteh was the lawyer tasked with handling the suit by Woyome against Ghana, and who decided (or was instructed) not to oppose Woyome’s claim.

We have however seen what purports to be a report from the AG on this matter. We note that although the Nerquaye-Tetteh matter has been an issue since 2012, a Disciplinary Committee was only put in place on 11th December 2015 “to investigate allegations of unethical conduct of Mr. Samuel Nerquaye-Tetteh’s involvement in the Alfred Woyome case”, among several other matters involving a number of AG staff. We are left to wonder what has been happening in the intervening period.

But even the self-serving report produced by the AG in court claims that the Committee faced undisclosed “initial challenges” and only started sitting on 11th February 2016. It was only on 3rd October 2016 that hearings on Nerquaye-Tetteh ended (they are crafty enough not to say when his hearing started.)

The letter also claimed that there was a draft report that was being considered and that a meeting slated for 14th November 2016 would consider the matter before issuing a final report on an undisclosed date.

What the AG hoped Ghanaians would not notice, and which Omane-Boamah deliberately did not disclose, was that the Committee was mandated to conclude its work and “submit a report with recommendations” to the Legal Service Board “within one month”. It is apparent that no one within Government or the AG’s Department is mindful of that time limit, and a one-month mandate can stretch into one year, without any queries or regrets. Yet, somehow the people of Ghana are supposed to be confident in these institutions.

Throughout this matter, the interest of Ghana has been thrown to the dogs by those who have been elected or appointed and paid with our taxes to protect our interest. They agreed to pay this money to Woyome without a contract.

They allowed him to amend his claim in court for more times than was allowed, without lifting a finger in opposition. They decided not to show up in court, thereby allowing him a free and uncontested route to a default judgment. Even when they claimed to have discovered, belatedly, that there was no contract with Woyome, they only put out a half-hearted effort to reverse the mess that they had caused.

Nothing is more painful than the fact that after they had sued for a court to determine that we did not owe Woyome anything, they still went ahead to pay the full amount to him; that was even when a court had agreed that we could hold on to two-thirds of the amount.

When EOCO was asked to investigate the matter, they could only come up with a wishy-washy “preliminary report” which was more notorious for what it did not say than for the precious little it said. When the matter broke, several government persons, including some who have subsequently been rewarded with ministerial appointments, lined up to defend Woyome without a shred of shame.

What we have seen, even after Mr. Martin Amidu was successful in obtaining a Supreme Court judgment against Woyome, is a long and inexplicable delay in enforcement, that has grown from being ridiculous to ludicrous by the day.

And it was a pathetic sight to see our Attorney-General marshal several top lawyers (paid with our taxes) to court to strenuously oppose Mr. Amidu’s application to examine Woyome. If the AG’s Department had put a fifth of that effort into fighting off the bogus case Woyome filed against us, or his botched prosecution, we would not be in this mess today. It is evident that Woyome has our AG’s Department wrapped around his little finger and he is literally allowed to dictate to us how and when we can recover the money from him.

This must not be allowed to happen, and hopefully, Mr. Amidu’s examination of Woyome will reveal sufficient assets that could be recovered or sold to recover what he owes Ghana. We deserve to know what properties Woyome still has, and much more importantly, who were the beneficiaries of the ill-gotten largesse that he milked from us.

Woyome has bled us dry of GH?51M of our tax monies. Thanks to the Supreme Court and Mr. Amidu, he is no longer being allowed to lead us by the nose around the park with a song and a dance; no thanks to the AG!
Yours in the service of occupying hearts and minds for God and Country