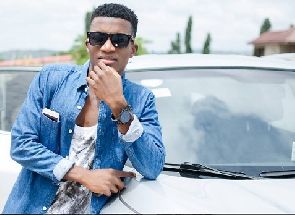 People boozing too much with my ‘Confession’ song – Kofi Kinaata cries

Highgrade Family act Martin Kofi King Arthur has complained about the excessive drinking habit of folks who are in love with his December release Confession.

The Kin Dee produced record was meant to advice folks to cut down on the amount of booze they took in but according to the award winning songwriter, music fans have twisted the message.

In an interview with Happy FM’s Mercy Bee; Kinaata disclosed;