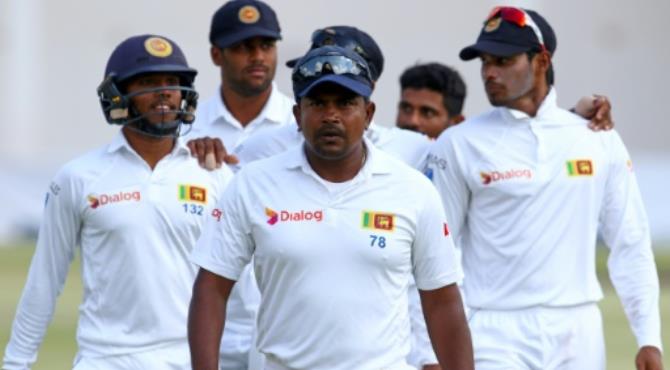 Harare (AFP) – Rangana Herath registered his second five-wicket haul in as many days as Sri Lanka closed in on victory in the second Test against Zimbabwe at Harare Sports Club on Wednesday.

Herath followed up his five-wicket haul in the first innings with 5 for 45 in the second as Zimbabwe, set 491 to win, went to stumps on the fourth evening on 180 for seven.

While Herath’s 5 for 89 on Tuesday had made him just the third bowler to take five-wicket hauls against all nine Test opponents, on Wednesday he became the first bowler to take 50 wickets in the current calendar year, having done so in just eight Tests. Sri Lanka’s Dimuth Karunaratne celebrates reaching his half century on the fourth day of the second Test against Zimbabwe in Harare on November 9, 2016

‘The wicket is two-paced and has some uneven bounce, and he’s been bowling wicket-to-wicket, which is the key.’

The tourists began the fourth day on 102 for four in their second innings, with an overall lead of 334, and spent the first half of the day extending that advantage.

With first innings centurion Karunaratne anchoring the innings with a patient 88 and Kusal Perera adding a quickfire 62 towards the end, Sri Lanka were able to declare their second innings on 258 for nine to set Zimbabwe 491 to win.

Although they were unable to claim 20 wickets for an eighth straight Test match, Zimbabwe’s bowlers managed to slow Sri Lanka’s scoring in the first session, then picked up wickets when the visitors went on the attack after lunch.

Leg-spinner Graeme Cremer finished with figures of 4 for 91 after taking three late wickets, while fast bowler Carl Mumba took 3 for 67.

‘There was a lot of pressure before we came into the day,’ said Zimbabwe batsman Sean Williams.

‘I think we were really good with the ball — our bowlers came back well.

‘But then with the bat, senior players such as myself are getting starts and not finishing.’

Left with 136 overs to bat in order to save the match, Zimbabwe saw Brian Chari bowled by Herath in the eighth over of their innings, before the left-arm spinner trapped Hamilton Masakadza lbw in his next over.

After tea, Herath struck again, having Tino Mawoyo caught at slip, before Williams and Craig Ervine battled back with a 74-run stand for the fourth wicket.

The pair counter-attacked to good effect, but were eventually separated when Williams edged a delivery from Lahiru Kumara to slip to depart for 45.

Malcolm Waller fell for a duck in the very next over, before Herath snapped up two more quick wickets late in the day, completing the seventh 10-wicket match haul of his career.

Ervine batted through to reach the close of play on 65 not out, but will only have tail-enders for company on the final day.

‘Craig is batting well, but we’ll work on their other batsmen to try and pick up the last three wickets as soon as possible,’ said Karunaratne.