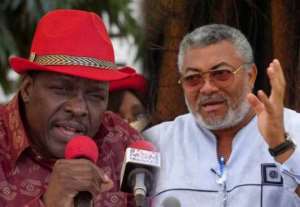 His promise to depart from previous leadership styles that alienated executives of the party has caught on in the Volta Region too.

Executives of the NDC in Southern Volta have joined their Greater Accra, Ashanti and Western Region counterparts to welcome the ‘Bagbin-Way’.

This came to light during a meeting of party members at Keta on Wednesday, where Mr Bagbin was hailed and endorsed as the NDC’s best choice for 2020, while former President Rawlings was also singled out for praise for his contributions over the years.

Mr Christopher Mensah, NDC branch chairman in the Keta constituency said: ‘It is a well-known fact that Mr Bagbin is incorruptible and therefore in the 2020 election, he would be the obvious choice for many Ghanaians.’

He said Mr Bagbin was becoming acceptable in the rank and file of the party, not only because of his rich political history and career, but on account of his promise to carry every member along, if he got the slot.

‘Like Mr Bagbin himself has said, those who got the opportunity to go to Flagstaff House through the party’s ticket and then turned round to justify their alienation of the party, forgot that it was politics that took them there in the first place.

Infact Mr Bagbin and former President Rawlings have over the years helped the NDC in diverse ways and deserve to be hailed by the rank and file’.

Mr Wisdom Kukubor, executive member in Ketu South said, ‘Mr Bagbin is perfectly cut for 2020 because as a Northerner, he would pick up from where President Mahama, another Northerner left off.

He said Mr Bagbin and former President Rawlings enjoyed a lot of support in the Volta Region because of their good works.

Amidst the general consensus that Bagbin’s promise to make party executives central to his administration is the leadership style NDC needs, Mr. Dedoo Linus, a communication officer in Ketu South, at the meeting, touted, Mr Bagbin’s credentials and track record.

He pointed out that the longstanding MP for Nadowli Kaleo, who is the current Second Deputy Speaker of Parliament, is also the longest serving Legislator and the most experienced.

Among others, Mr Bagbin represented Ghana on the Commonwealth, Caribbean and European Parliamentary platforms, including his rich track record, in the form of his bio data was distributed to attendees at the meeting and has since been trending on social media.

Between 2014 and 2016, he was a member of the Executive Committee of the Commonwealth Parliamentary association (CPA). From 2013 to 2015, he served as member of the African, Caribbean Pacific and European Union Joint Parliamentary Assembly in Brussels Belgium.

From 2003 to 2010 the Nadowli Kaleo MP was a member of the International Council for Parliamentarians for Global Action, while between 2002 and 2010 he was a Founding Member of the Global Organisation of Parliamentarians Against Corruption (GOPAC) headquartered in Canada.

As Part of Mr Bagbin’s rich track record, he served as Vice President between 2003 – 2009 of the Committee on Democracy and Human Rights Inter-Parliamentary Union (IPU) Geneva, Switzerland; from 1999 – 2005, he was Member, African Parliamentary Network Against Corruption.