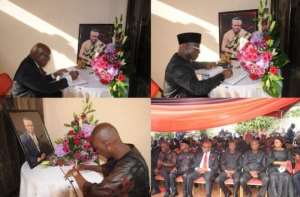 The Speaker, Prof Mike Oquaye and the Leadership of Parliament on Thursday attended the one-week celebration of the late Joseph Henry Mensah, a former Senior Minister at his East Legon residence.

The solemn occasion was also attended by a large number of parliamentarians as well as Ghanaians from all walks of life.

The veteran politician died on Thursday, July 12, at the 37 Military Hospital in Accra.

In addition, the Speaker and leadership of Parliament also presented an amount of GH¢2,000.00 to the family of the deceased.

Besides, the Brong Ahafo caucus in Parliament also presented an amount of GH¢2,000.00 to support the funeral of the late J.H Mensah.

Later, the Speaker, Prof Oquaye, Mr Kyei-Mensah-Bonsu and Mr Haruna Iddrisu took turns to signed the book of condolence in memory of the late J.H. Mensah.

Earlier in the day, the Speaker, Prof Oquaye, the leadership of Parliament and parliamentarians filed past the body of the late Vice President, Paa Kwesi Bekoe Amissah- Arthur which was laid at the foyer of the Accra International Conference Centre.