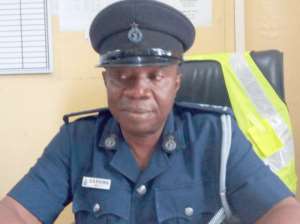 Tema, 1 Oct, GNA – The Tema Police Command on Monday gunned down two alleged armed robbers and arrested two others after engaging them in a shootout.

Deputy Superintendent of Police (DSP) Joseph Benefo Darkwah, Tema Police Regional Public Relations Officer, told the Ghana News Agency that, the Command received information on October 1, at about 00:30 hours that the UT Logistics Bonded warehouse located in near the VALCo roundabout had been besieged by armed robbers.

DSP Darkwah said a police team was dispatched to the scene, where the robbers numbering about 10, engaged them in a gun battle.

In the process, two of the alleged robbers were wounded and two others, Yaw Lagekpo, 47 years and 45-years-old Boking Godwin, were arrested while the rest managed to escape.

He indicated that the two wounded robbers were rushed to the Police Hospital where they were pronounced dead and that bodies were being kept at the hospital’s morgue awaiting autopsy.

The two arrested, he stated, were in Police custody assisting with investigations.

DSP Darkwah stated that two security guards stationed at the warehouse who were tied up by the robbers were rescued by the Police.