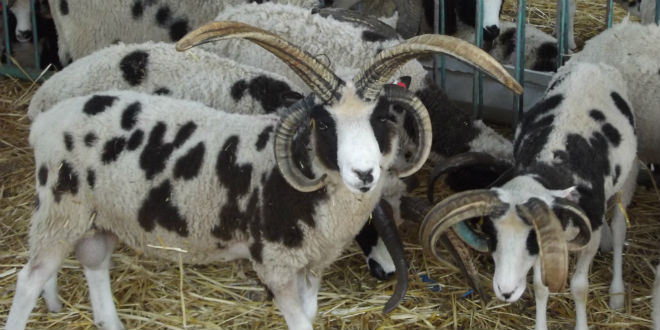 WATCH: Sound of Messiah Is Heard in Israel as First Jacob’s Sheep Shofarot in 2,000 Years Are Blown

For the first time since the Temple stood in Jerusalem, the sounds of shofarot (ram horns) from Jacob’s Sheep were heard in Israel, trumpeting out from the mountains of Naftali, in a powerful chorus that may soon be announcing Messiah in the far corners of the world.

A small ceremony was held in Ramot Naftali near the Lebanese border on Sunday afternoon to inaugurate the Jacob’s sheep shofarot. Jacob’s Sheep originated in Northern Israel and though it is a sought after-breed in Europe and Canada, the sheep have not existed in Israel since Biblical times. The breed derives its name from the unique dark spots that correspond to the story of Jacob and Laban.

Let me pass through your whole flock today, removing from there every speckled and spotted animal—every dark-colored sheep and every spotted and speckled goat. Such shall be my wages. Genesis 30:32

The ceremony was a bittersweet celebration. After struggling many years to overcome bureaucratic hurdles and practical obstacles, Gil and Jenna Lewinsky finally succeeded in bringing their flock of 119 sheep from Canada to Israel last year.

“At first I thought that this was a crazy idea,” Jenna said at the ceremony. “But when we started to hear the reactions from around the world, how so many people see the geula (redemption) coming when they see the sheep, I realize that all the effort is worth it. After all, what can be more important than that?”

Despite succeeding in this daunting task, the couple’s trials were still not over when they landed in Israel. Two months ago, many of the sheep contracted Bluetongue Disease. Mortality from the disease can run as high as 90 percent in imported breeds. From the Lewinskys’ herd, 48 sheep died, leaving the couple with slightly more than half their original herd. Remarkably, the young lambs born the month before, normally the most susceptible to the disease, were all spared.

“It was so sad to lose so many rams,” Jenna told Breaking Israel News. “But sometimes, that is the way God brings joyous blessings into the world: through sadness and suffering.”

The blessing came in the form of the horns of the dead rams. Jacob’s Sheep are unique in that the rams each have four horns from which to make shofarot, rather than just two. After having 34 horns prepared and made into shofarot, the Lewinskys offered them for sale at $500 each.

Within 24 hours, every single shofar was purchased, all by Chinese Christians. This unusual arrangement was made through Grace Wang, a pastor in San Diego whose Chinese-language Torah lessons reach tens of thousands of people each week. Grace and her husband David, originally from Taiwan, have been connected with the Lewinskys for over a year. Grace saw the shofarot as an opportunity to bring the light of Torah to China.

Grace told Breaking Israel News that at the root of all her teaching is that Judaism was the source and basis for Christianity. She struggles against replacement theology (the belief that the Church replaced Israel in the covenant with God) but sees it taking many insidious forms in the modern world.

“Replacement theology destroyed Christianity,” Grace said. “Many Christians are rejecting it, but the current political agenda that wants to establish a Palestinian State is the same as replacement theology: replacing Israel’s place in the covenant.”

Grace believes that the powerful sound of the Jacob’s Sheep shofarot will help battle this political agenda.

“The Chinese government has been trying to force a bad peace on Israel, most recently on the ninth day of the Hebrew month of Av, commemorating the destruction of the Temple,” Grace told  Breaking Israel News. “This new sound released from heaven will bring tshuva (repentance) to China and bring our country closer to Israel.”

Gil has a different explanation, attributing this Chinese connection to the prophecy in Isaiah.

Look! These are coming from afar, These from the north and the west, And these from the land of Sinim. Isaiah 49:12

“Sinam” is interpreted to mean “Chinese.” The Hebrew word for China today is “Sin.”

Grace and David Wang come to Israel several times a year, and were happy to be on hand to take the shofarot home and send them to their final destinations all over China.