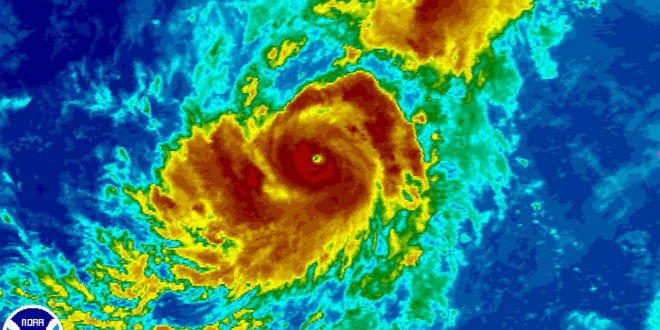 A satellite view of Hurricane Irma in the tropical Atlantic Ocean. (National Oceanic and Atmospheric Administration)

When the solar eclipse crossed over the continental United States two weeks ago, it was immediately followed by a hurricane of epic proportions in a manner that conformed precisely to prophetic sources. Two weeks ago, a rare solar eclipse transversed the US, the first time in 99 years such an event had occurred. Four days later, Hurricane Harvey hit Texas. The connection between the eclipse and the hurricane was implicit in how events unfolded.

When the eclipse’s path of totality passed out to sea over the Atlantic Ocean, it crossed over three storm systems. At the time, meteorologists stated that “the odds for development of those systems is very low”, but one of the systems revealed itself to be far more than the scientists anticipated. One of the systems touched by the dark path of the eclipse was the now infamous Hurricane Harvey, currently the second-most costly natural disaster in US history.

The connection was explicitly prophetic. One week before the solar eclipse, Breaking Israel News presented an article describing a prophecy in the Yalkut Moshe, written by Rabbi Moshe ben Yisrael Benyamin in Safed in 1894. Rabbi Benyamin predicted that when a solar eclipse occurs at the beginning of the Hebrew month of Elul, as this one did, “It is a bad sign for the other nations, bringing great damage to the kings of the East, and bringing great storms.”

But the Yalkut Moshe promised “storms”, and now the second storm system over which the eclipse passed is poised to inflict more damage. Irma is now a category three hurricane lingering off the coast, gaining strength and threatening to wreak havoc in an already devastated region.

“Prophecy is meant to reinforce that God is behind all these events. If God says that he is going to do something, and then it happens right in front of your eyes, you should believe the entire message,” Rabbi Yosef Berger, rabbi of King David’s Tomb on Mount Zion, told Breaking Israel News of the storms.

“If a person sees totally unanticipated events, wonders of nature arriving in unexpected fashion, if that person still refuses to believe the prophecy that predicted them, then there is nothing you can say to such a person.”

At the time of the eclipse, Rabbi Berger explained that the prophecy concerning “kings of the east” referred to Kim Jong Un, the despotic leader of North Korea. In the wake of the devastation wreaked by Hurricane Harvey, less attention has been focused on the conflict with North Korea, but that political situation has also progressed in its prophesied manner.

One week after the eclipse, North Korea fired a missile over Japanese airspace. The American response, live-fire runs by heavy bombers, contained an unmistakable threat any sane leader would heed. But in the most illogical manner that seemed intended to lead the rogue Asian nation to destruction, North Korea exploded a hydrogen bomb in their most powerful nuclear test to date. The underground test generated a 6.3 magnitude tremor under the earth and perhaps even greater tremors in international relations.

Rabbi Daniel Asore, a member of the nascent Sanhedrin, also understood current events as part of a prophetic process.

“The eclipse transversed the entire US so it was clearly a message for that nation,” Rabbi Asore told Breaking Israel News. Rabbi Asore quoted the Talmud (Sukkot 29a), which stated that a solar eclipse was a bad sign for the non-Jewish nations, who are represented by the sun and figure their calendar according to the solar year.

“It comes as a natural phenomenon, but it is really meant to affect the people,” Rabbi Asore told Breaking Israel News.  “Natural disasters are meant as a warning, like a father slapping the table in order to warn his children that they are doing something that angers him.”

“Man is the connecting point, made up of body and soul,” the rabbi said. “The two are connected and play off of each other. If you look at America, they are seeing these extreme natural phenomena, but at the same time, there has been rise in Nazism on the right and the extreme left, both sides united by a hatred for Israel.”

The rabbi explained that by emphasizing the physical and denying the spiritual, man gives himself over to nature and is at the mercy of natural disasters. He cited this as the basis of the verse in Jeremiah.