BREAKING NEWS
GMT+2 07:12
Home Showbiz We Will Release All Ebony’s Projects In Her Absence – Bullet Assures 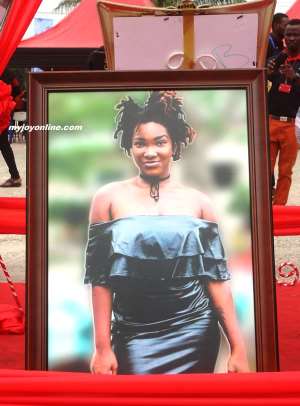 The manager of late dancehall artiste Ebony Reigns has announced his readiness to keep the memory of the musician alive by releasing the many songs she did before her death.

In an emotionally packed tribute, Bullet of the Ruff n Smooth fame said his record label Ruff Town Records will release Ebony’s next album in the coming days.

“It is to ensure that Ebony Reigns will live forever,” the music entrepreneur said, unable to restrain her tears from flowing.

St Martin de Porres School at Dansoman has not been able to contain the teeming crowd that has massed up to mark the one-week passing of the artiste.

Ebony died in a car crash on the Kumasi-Sunyani highway while journeying to Accra after visiting her mother who had visited from the UK.

She died with two others – Franky Kuri and Lance Corporal Vondee Atsu – who were with her in the vehicle.

Her death led to a huge outpouring of grief and sympathies from music lovers, fans, colleagues, friends and politicians here in Ghana.

“Whatever Ebony Reigns wanted to do for the family, we will get it done,” Bullet said.