Wiyaala Reveals What Pushed Her Out Of Ghana Music 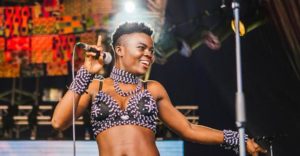 Afro-pop singer Noella Wiyaala has said the lack of appreciation for her style of music here in the country pushed her out of the country.

Nicknamed ‘The lioness of Africa’, the singer has over the years made few appearances on the local music scene, focusing on promoting her craft internationally.

“I am an untamed lioness, I’m doing my thing and they need to accept that. If they will like to support they should’, the Rock my body singer said.

The Afro-pop star who sings in her native Waala and Sissala dialect as well as in the English language often combine all the languages in her songs.

According to the Girl band member, when an artiste is not doing what the Ghanaian ‘system’ wants, the artiste gets blacklisted.

Wiyaala said she is the last person on the minds of event organisers because they do not care about her.

Meanwhile, the musician has advised the younger crop of talents to stay true themselves as living a lie will always catch up with them.