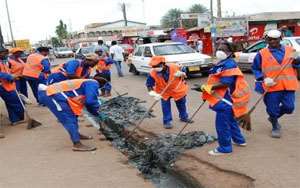 Zoomlion Ghana Limited and the Accra Metropolitan Assembly (AMA) have collaborated with the City of Cape Town in South Africa to be able to feed into President Nana Addo Dankwa Akufo-Addo’s mantra of making Accra the cleanest city in the sub-region. This effort by the two organizations having great interest in waste management in Accra appears to be drumming home the good old saying of “Together we stand/build” for them to adopt best practices to the President’s ambition. Kudos to the AMA and Zoomlion Ghana Limited and more especially to the City of Cape Town.

What Ghanaians should now be trusting the two entities do is that they will work together to take Ghana especially Accra from its current state of waste spots to a better destination like the City of Cape Town that will reflect the President’s stance of making Accra the cleanest city of the whole of West Africa, anything less than that collaborative drive by them will be disingenuous to the people of Ghana.

A team of eleven (11) waste management practitioners from the AMA and Zoomlion visited the highly respected South African richly developed city (Cape Town) to understudy their Integrated Waste Management System(IWMS) to be able to apply their seeming successful modern technologies and approaches to addressing the waste challenges of Ghana’s capital city Accra which is contemporarily known as the gate way to West Africa. It is obvious that as the gateway to the sub-region, it must uncontestably be clean, neat and beautiful to address the needs of tourists.

Three waste management facilities at, Bellville, Kraaifontein and Vissershock have widely handled the waste challenges in the city of Cape Town admirably said some residents of the city.

A task force of 33 members call the Law Enforcement Unit under the City Authority is responsible for arresting, charging and ensuring statutory laws are strictly abided by. The citizenry are abundantly aware of their duty to dispose all kinds of waste at these facilities or use the container/bin system and that is what has contributed to making the city a tourism centre among other enviable sites such as the Table Mountain, Waterfront Mall, the Red Bus ride which gives one the opportunity to see the city from many positions and the Long Street among others.

At the Bellville Landfill and Waste Management Facility which occupies a 73 hectare of land, there are units of the Landfill Section where solid waste is collected and compacted immediately in order not for the landfill to be overwhelmed by waste, a Garden Waste Section where unwanted flowers and trees fell from the city are brought and disposed and later chopped into pieces by private contractors and eventually used in producing compost fertilizer for sale. Also is the Builders Rubbles’ Section where broken walls and unwanted bricks are brought and offloaded and fragmented into fine sand for construction of low cost houses and the less graded ones use for compacting the landfill. At the same facility is the Liquid Waste Facility where the treated leach water is used to water the landfill roads to calm the evident dust on dry days. These are all efforts to reduce, recycle and re-use, what is being sent to the final disposal site a practice Zoomlion is also known for already in Ghana.

Bellville South Landfill which collects in excess of 40,000 tons of waste in a month is due for closure for landfill purposes by city authorities but will remain a transfer station where waste will now be received and transferred to a proposed regional landfill site. In South Africa, before an area can be allowed to operate as a landfill it must be completely fenced unlike what is currently practiced in parts of Ghana. Unlike Ghana where waste is transported by trucks and motorized tricycles, the City of Cape Town has advance by using trains to transport their waste to final disposal sites. A practice Ghana will need to emulate to reduce traffic on the roads in terms of haulage.

The Kraaifontein Integrated Waste Management Facility (KIWMF) on the other hand, was designed to receive and transfer the waste load in Western Cape Town. The facility is the first integrated waste management facility of its kind in South Africa. As a broad integrated waste management facility, KIWMF encompasses a transfer station, drop-off facility, container handling area, a chipping area for the processing of green waste (garden waste), hazardous materials holding area for small quantities received at the drop-off, e-waste and oil holding containers for oil waste.

Facility managers say the compaction hall is used for compacting waste into containers and a dual weighbridge system with two incoming and two outgoing weighbridges. That integrated attitude, having all activities of waste-handling on-site, is what makes the facility unique. Almost half of the waste that is received at the site is sorted and sold off to private recycling contractors.

Management says the city authorities has an entrenched position to keep the city clean therefore dumping appropriately at the landfill or transfer stations are free which incentivizes citizens to dump at the facilities in order not to fall prey to the ever watching men and camera law enforcement authorities.

What Ghana needs to do in this direction is to replicate the Waste Taskforce units which has been started by AMA and the Kumasi Metropolitan Assembly (KMA) to all Metropolitan, Municipal and District Assemblies (MMDAs) and empower them to arrest, charge, find and prosecute using the sanitation courts. The ministry of Justice and Attorney General should also expand the Sanitation Court system to all regions and MMDAs to address the sanitation issues in Ghana.

Vissershok Waste Management Facility on the other hand combines both solid and liquid waste management whereby there is the Liquid Waste Management Facility and an Engineered Landfill receiving waste material such as tetra pak, builder’s rubble, garage waste, motor oil, clean garden waste, paper and cardboard, cans and metal, glass bottles, polystyrene, plastic and low to medium hazardous waste. This facility however does not receive e-waste. The facility which is engineered and projected to serve as a regional landfill site to the city of Cape Town beginning this year is multipurpose and has the capacity to run for many years.

City authorities say their waste management style is geared towards minimizing waste from homes, offices and facilities that are meant for the final disposal site and indeed it does reduce waste by 30% a mechanism that is hugely laudable and beneficial to the people.

The most critical lessons learnt in this collaboration that the Government of Ghana (GoG) will need to consider greatly is, the fact that in Cape Town the political will to fight waste is very evident and high in that, waste management infrastructure is largely the problem of government and not in the hands of the private sector like in Ghana where efforts to address the waste management problems is in the hands of the private sector. Of all the waste management efforts made such as the Accra Compost and Recycling Plant (ACARP), the Kumasi Compost and Recycling Plant (KCARP) which is 85% complete, the Accra Sewerage System and the plastic recycling plants such as Universal Plastics Processing and Recycling (UPPR) and YEECO Plastics are initiated and own by the private sector precisely the Jospong Groups of Companies.

In Cape Town for instance is the Kraaifontein Integrated Waste Management Facility which is a waste transfer facility. KIWMF is solely owned by the government and patronized by the private contractors on contract basis but the case is different in Ghana as the only two transfer stations at Teshie and Achimota all in Accra are owned by the Jospong Groups of Companies owners of Zoomlion Ghana Ltd, Ghana’s waste management experts and leaders. What is needed in this respect would be that government will further create a more enabling environment and provide full corporation and support for the private sector to take the country to paradise in terms of waste management

The other lesson is the South African Government’s commitment to vote funds for waste management activities. Will the Ghana government exercise the same commitment in delivering on even its annual plans and budgets to develop one modern engineered landfill and a transfer station in each of the ten regions to ease the waste problems? This is the conundrum at hand in Ghana. The kind of landfills in the regional capitals leaves more to be desired, talk least of what is at the district levels which are better described as dumping sites.

It was however unfortunate some residents in the city this writer interacted with in Cape Town do not have express idea about how waste is managed and even who manages it but knows that it is an offence to litter or dump haphazardly, which is a plus to the law enforcement unit of the city’s waste management department.

It therefore presupposes that city authorities would have to intensify public education to create more awareness as to how waste is managed and reorient citizens of their mandate on waste management in Cape Town an effort that Ghana will need badly too.

Team members especially admired the manner in which waste is sectionalized at the facilities and how serious the city authorities see waste management and the security adherence at the facility. They waste practitioners say the waste reduction rate at 30% by the CCT is commendable. Ghana will need to step up efforts towards a similar feet.