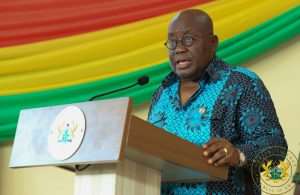 President Akufo-Addo will from today [Thursday] begin a 7-day tour of the Northern, Upper East and Upper West Regions.

The week-long tour will see him visit a number of selected constituencies in the three regions.

While in the Upper East Region, President Akufo-Addo will inspect ongoing work on the Bongo-Balungu-Namoo-Zorko road; visit the 1-village-1-dam project site at Kuyellingo in Bongo; inspect ongoing work on the Navrongo-Chuchuliga-Sandema Road; cut the sod for the construction of a new District Police Headquarters; and interact with chiefs and traditional rulers, amongst others.

The President has in the last few months been on a nationwide tour that has seen him visit the various regions to interact with the chiefs and people there.

His last tour was earlier in July in the Volta Region after previous visits to the Western Region and the Ashanti Region where he spent 2 days.

Prior to that, he had embarked on a 3-day tour of the Brong Ahafo region .

While in the Brong Ahafo Region, President Nana Akufo-Addo declared his government’s commitment to the development of the road infrastructure to facilitate the transportation of goods and services.

The President’s last trip around the country in 2017, ended in the Eastern Region in December 2017.

The tours are intended to give the president first-hand information on the major developments across the country and assess the needs of the various regions.