BREAKING NEWS
GMT+2 06:53
Home Showbiz Ask your mother if your dad is really your dad – Nana Aba Anamoah to tweet 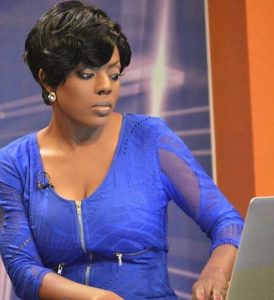 Perhaps, the portion of the Bible which says “Answer a fool as his folly deserves, that he not be wise in his own eyes” was what came to mind when Nana Aba Anamoah had to reply a tweep who tweeted at the television personality that it was shameful for her to have a baby outside marriage.

According to Nana Aba Anamoah, although she is not happy she gave birth out of wedlock, she cherishes her son.

In a sarcastic response, she insinuated that the tweep could be himself born out of wedlock saying, “You should ask your mother if your dad is really your dad though”.

Having babies outside marriage is shameful @thenanaaba

Nana Aba Anamoah in an interview on Live FM some time ago recounted how she tried to abort the pregnancy but failed on all attempts, abrantepa.com recalls.

“And then, I spoke to my brother and said ‘okay they said I should do a pregnancy test so give me your urine because I don’t want to give them my urine. And it came back positive. It came back positive then I knew my son didn’t want to go because I tried everything. People had given me injections, I did everything. And I can understand why this boy just wouldn’t go because he changed my life.” she said.