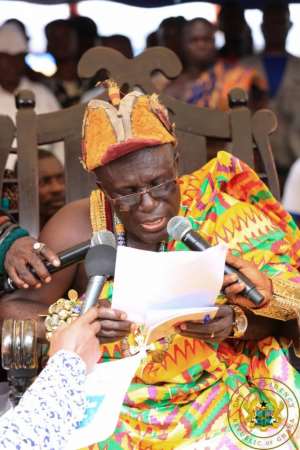 The Paramount Chief of Lower Axim in the Nzema East Municipality of the Western Region, Awulea Attribrukusu III has made a passionate appeal to the government of Ghana to build an Assembly Hall and Administration Block for the only public Senior High School in the area, Axim Girls to facilitate effective and smooth running of the school.

Axim Girls SHS is the only Senior High School in the area and Nzemaland which was started as a private school.

The school was established by Awulea Attribrukusu III and solely paid the teaching staff for more than five years before it was absorbed by the state.

Speaking to the media, Awulea Attribrukusu III gave thanks to the Ghana National Petroleum Cooperation (GNPC) and Tullow oil company for supporting the school.

He also added that Tullow on their part, constructed 420-capacity dormitory for the school.

“We are grateful to GNPC and Tullow oil for the good things they are doing to support the school. GNPC has provided eighteen classrooms, two-computer laboratory and one master common room. Tullow Oil Company has constructed 420-capacity dormitory for the school all through the efforts of Awulea Attribrukusu III”, he told the media.

He said the school is currently facing infrastructure challenges and therefore appealed to the government to support the school to be attractive and make academic works easy.

“The school is currently in need of a dinning hall, Assembly Hall, a Science laboratory and an Administration Block. We will be grateful if the government will consider giving a face-lift to the Axim Girls SHS is the Nzemaland to be to educate more girls to become good citizens in the nation”, he pleaded.

Awulea Attribrukusu III, therefore used the opportunity and appealed to Ministry of Education to come to their aid and upgrade the only Vocational Training Institute in the area to training more youth.

“We are also appealing to the Ministry of Education to upgrade the only Vocational Institute at Axim which is also only one in the municipality”, he added.

Awulea said “It is being rumoured that government is planning to establish a Teacher Training College in an unknown location in the Nzemaland and will appeal to President Akufo-Addo to consider Nzema East Municipality since Nanamoo are very ready to release land for the this project”.

He added “This will help to to solve the problem of pupil teacher been more than train teachers in the Municipality”.

Awulea Attribrukusu said that as his efforts to make education very attractive in the area, he revealed that he has given scholarship packages to four students to further their education at the tertiary levels. He said two students just completed the Girls Axim SHS and other two students from different SHSs.