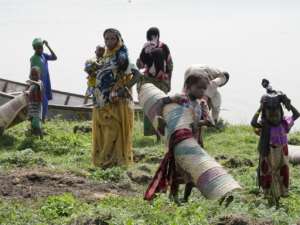 Boko Haram’s Islamist insurgency has devastated the region since it took up arms in 2009, leaving at least 20,000 people dead, displacing more than two million. By CAROLINE CHAUVET (AFP/File)

Eighteen people have been killed in an attack by suspected Boko Haram jihadists in the Lake Chad region, a Chadian military source said Sunday.

“Boko Haram elements attacked a village south of Daboua,” not far from Chad’s border with Niger, at around 9:00 pm (2000 GMT) on Thursday, the military source said.

The assailants “cut the throats of 18 people, wounded two others and kidnapped 10 women”.

Boko Haram’s Islamist insurgency has devastated the region since it took up arms in 2009 in Nigeria, leaving at least 20,000 people dead, displacing more than two million others and triggering a humanitarian crisis.

Chad, Cameroon and Niger have all joined the military effort by Nigeria to crush Boko Haram.

Chad has seen a recent increase in attacks by the group.

In May, six people were killed, including four government officials and a soldier, in a Boko Haram attack on a Chadian army checkpoint on an island in Lake Chad.

Niger’s army said Saturday it killed “ten terrorists” after one of its military positions in the southwest of the country was attacked by Boko Haram.