BREAKING NEWS
GMT+2 03:25
Home General News Appointments By The President-elect To The Office Of The President 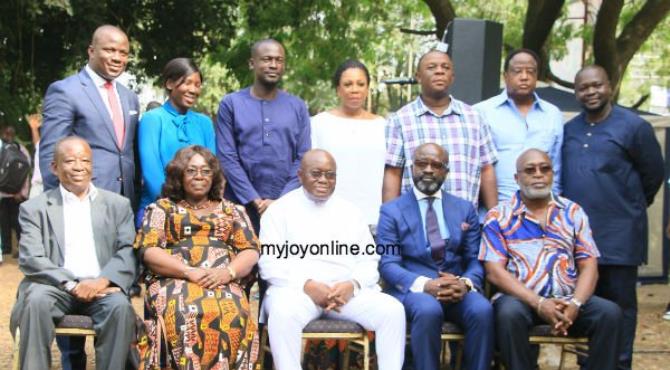 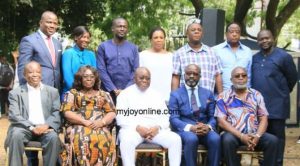 The President-elect, Nana Addo Dankwa Akufo-Addo today out-doored the first list of his appointees, most of whom will be working with him at the Flagstaff House or Jubilee House, depending on how he intends to call it. Below are the names and profiles of the appointees:

BRIGADIER GENERAL EMMANUEL OKYERE – NATIONAL SECURITY ADVISOR
Brigadier General Emmanuel Okyere is a military engineer and holds an Executive Master’s Degree in Governance and Leadership from GIMPA. He’s also a graduate of the Ghana Military Academy, has a solid military background, having done almost 40 years of distinguished service with the colours.

He served in various capacities in both the military and local government. He served as the Metropolitan Chief Executive of the Kumasi Metropolitan Assembly from 1995 to 1996; and from 2006 to 2010, he was the General Officer Commanding the Southern Command

JOSHUA KYEREMEH – NATIONAL SECURITY CO-ORDINATOR
Joshua Kyeremeh is a product of the Kwame Nkrumah University of Science and Technology, and a former Director of the Bureau of National Investigations (BNI). He worked at the BNI for about 22 years, where he served at command levels in the Northern, Upper East, Ashanti and Greater Accra Regions. He also served as head of the Investigations Unit of the Bureau. He rose to become the Deputy Director BNI and ultimately, the Director BNI from 2005 to 2009. Akosua Frema Opare, 69, is a development consultant and a labour and employment expert, with 40 years of experience in these fields. She holds a Bachelor of Science degree in Home Science from the University of Ghana, and a Master’s degree in Foods, from the University of Guelph, Canada. She was a lecturer at the University of Ghana, Legon, from 1976-1982; Consultant for the United Nations in the ‘Women in Fisheries’ programme in countries such as Uganda, Ethiopia, Congo, Kenya and Namibia. She was also Deputy Minister for Manpower, Youth and Employment from 2005 to 2008, under the government of President John Agyekum Kufuor. She was a two-term Member of Parliament for Ayawaso West Wuogon.

She is married with 4 children. Nana Bediatuo Asante is a 53 year old lawyer with over 20 years experience practicing law. He was educated in Ghana, the United Kingdom and the United States, where he obtained a Doctor of Law degree from the New York University of Law. He was called to the bar in New York, Ghana and is a member of both bars.

He is currently the Managing Partner at Ampem Chambers, a corporate law firm in Ghana. He is married with four children. Victor Newman is 69 years old. He is an economist, consultant, financial and research analyst. He holds a Bachelor of Science degree in Agric Economics, with postgraduate qualifications in development planning and budget and financial management. He has worked at the Economic Research and Planning Services of the Ministry of Food and Agriculture, Western Castings Limited, and the Ghanaexim Economic Consultants. From 2008 till 2016, he has served as the Director of Research for the President-Elect’s electioneering campaigns.

He is married with four children. Francis Asenso-Boakye is 39 years old, and holds a B.Sc. degree in Development Planning from the Kwame Nkrumah University of Science and Technology. He has a Master’s Degree in Public Policy and Administration degree from the Michigan State University, and a Certificate in Public Sector Management from Tulane University, Louisiana, USA.

He is a development planning, project management, and policy specialist, with over 15 years of wide-ranging professional experience in his field, and has worked at the Ministry of Employment and Social Welfare, Global Media Alliance, Delta Acquisitions, USA, and the Ghana Free Zones Board, amongst others. Francis Asenso-Boakye has been Political Assistant to the President-Elect since 2008. He is married with 3 children. He is a member of the reputable commercial and corporate law firm, Messrs. Kulendi @ Law. He has been, since, his undergraduate days, a close aide of the President-Elect. He is married with one child. Hassan Ahmed is 62 years old. He holds a Master’s Degree from the Georgetown School of Foreign Service, and has been a career diplomat with Ghana’s Diplomatic Service for 34 years, having served in Saudi Arabia, Denmark, Cuba and Japan, where he was Deputy Chief of Mission. He was Chief of Protocol at the Ministry of Foreign Affairs when the President-Elect was Foreign Minister. His last posting was to the Islamic Republic of Iran, where he served as Ghana’s Ambassador from 2008 to 2012.

He is married with four children. Eugene Arhin is 33 years old. He graduated from the Kwame Nkrumah University of Science and Technology in 2006 with a Bachelor of Science degree in Materials Engineering. He worked as a Teaching Assistant in the Department of Materials Engineering for a year, and joined the Danquah Institute as a Research Analyst in 2008. He was with the Institute until February 2014 when he became Press Secretary to the President Elect.

He is married with one child. Lord Oblitey Commey, 48, is an accomplished entrepreneur and an astute politician known for his tactical, operational and organisational acumen. He was National Organiser of the New Patriotic Party (NPP) for eight years. Prior to that, he served as the Greater Accra Regional Secretary for the party.

In 2012, he was Director of Operations for the NPP presidential campaign, and, in 2016, he worked in the office of the President-Elect as the officer responsible for Monitoring and Compliance.

He is married and has three children. Saratu Atta is 53 years old. She is a graduate of the University of Warwick, UK, and holds a Bachelor of Arts degree in Politics and International Studies. She worked as a Securities Trader at First Securities Discount House in Lagos, Nigeria from 1993 -1997, and then went on to establish her own security printing company in Lagos. She was appointed NPP Campaign Secretary in 2008, and has been Office Manager and Executive Assistant to the President-Elect since 2009.

She has one child. Clara Napaga Tia Sulemana is 30 years old. She is a graduate of the University for Development Studies, and holds a Bachelor of Arts degree in Integrated Development studies, specialising in social, political and historical studies. She worked at the Ministry of Foreign Affairs for a year, and has also worked on contract with the Ghana Health service and the United Nations Children’s Fund (UNICEF) on maternal health issues. She was a campaign aide to the President-Elect during the 2016 electioneering campaign.