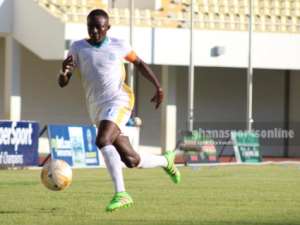 Aduana Stars coach Yusif Abubakar has confirmed that Wa All Stars captain, Hafiz Adams, has commenced training with his side as they gear up for the forthcoming season.

The Fire Boys will be competing in three competitions next season; the Ghana Premier League, FA Cup as well as the CAF Champions League.

The Dormaa-based side are reported to have signed Wa All Stars enterprising right back Hafiz Adams to fill in the void left by captain Godfred Saka.

And coach Abubakar has indicated that they will make more additions to the squad ahead of the busy schedule next season.

“Just today the Wa All Stars captain, Hafiz Adams, has started training with us for the right full back position. He is no longer with Wa All Stars; he is now with us and he is the only confirmed signing but we are close to signing other players from across Africa,” Abubakar told Graphic Sports.

“Even if he (Godfred Saka) comes back, we need a very strong all-around team. He is just there for trial but if he is not successful we will welcome him back. He is out of contract but is still with us because we have not said goodbye yet.”