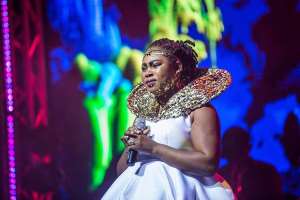 Gospel artiste Joyce Blessing has some education for individuals who have a problem with gospel artistes performing secular songs.

The singer came under intense public backlash for her ‘secular’ performance at the S-Concert held at the Accra Sports Stadium.

In an interview with Frankie 5 on ‘This Is Gospel’ on Hitz FM, the musician responded to critics of her act stating that anybody who condemns her performance lacks understanding of showbiz.

“I sang different songs…some don’t understand showbiz. It is not a problem. It doesn’t bother me,” she said.

The musician stressed the need for gospel artistes to be dynamic in their music and performances.

“If you are a gospel artiste, you have to be dynamic. Don’t be one way. As a gospel musician, you have to open your territory. It shouldn’t only be about the church. The whole of Ghana must hear of you,” she advised.

Joyce Blessing mentioned that her act on the night was planned and rehearsed.

She also responded to the claim that she had run out of hits songs, which was the reason for performing songs from secular artistes.

“If it comes to hit songs, I have a lot. I learn other songs. You don’t have to be one-way every day,” she stated.

The songstress added that her song selection was strategic in meeting the expectations of the audience.