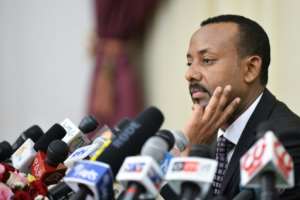 Ethiopia’s Prime Minister Abiy Ahmed (pictured August 2018), who took office in 2015 and has dealt with many anti-government protests for his agressive reform agenda, has been almost unanimously re-elected. By Michael Tewelde (AFP/File)

The 177 voting members of the ruling Ethiopian People’s Revolutionary Democratic Front (EPRDF) backed Abiy, along with his deputy Demeke Mekonnen, during the party’s long-delayed congress in the southern city of Hawassa, Fana Broadcasting Corporate reported.

Abiy, 42, took office in April after the unprecedented resignation of his predecessor Hailemariam Desalegn.

Starting in late 2015, his administration was roiled by anti-government protests led by Ethiopia’s largest ethnic groups the Oromo and Amhara, who were angered by the heavy-handed rule of the EPRDF, which controls every seat in parliament and has targeted dissenters during its 27 years in power.

Since his inauguration, Abiy, an Oromo, has pursued an aggressive reform agenda that includes releasing jailed dissidents and journalists, making peace with arch-foe Eritrea and announcing the privatisation of key state-owned enterprises.

But ethnic clashes in the countryside and violence in the capital have raised fears of looming crises in Africa’s second most-populous country.

During Abiy’s first public appearance in the capital Addis Ababa, a grenade attack set off a stampede, killing two people and injuring scores.

Meanwhile, nearly one million people have been displaced after fighting between the Oromos and the Gedeo ethnic minority in Ethiopia’s south broke out shortly after Abiy took office.

Last month, clashes on the outskirts of the capital left at least 58 people dead, with those fleeing saying they were targeted by Oromo mobs because they are members of minority ethnic groups.