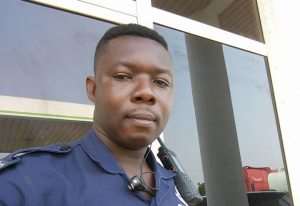 The Ghana Bar Association (GBA) has expressed disgust at the police brutality carried out on a nursing mother at the Shiashie branch of Midland Savings and Loans Company Limited.

The GBA has since urged the Police administration to follow through with disciplinary action against the said officer who perpetrated the crime.

A horrific video that circulated on social media on Friday showed a middle-aged nursing mother being severally physically assaulted by a uniformed and armed police officer.

The officer, who was later identified as Frederick Amanor, hit the woman’s head several times with an umbrella before landing many blows on her head and face.

He also dragged her across the floor as the woman tried to resist and fight back.

Reports say the incident occurred when the woman insisted that she be given her GH¢270, saved with the financial institution.

A staff of the company, who attended to the woman said they could not give her the money because their system was down but the woman, who claims she has been chasing the money since Monday.

According to her, she only gots excuses anytime she reported to withdraw the money but she purposed to ensure that she received it on Thursday only for a staff of the company to order the police officer to throw her out of the place.

Many social media users have expressed outrage over the matter, which subsequently led to the identification of the said officer and his subsequent arrest.

The management of Midland Savings and Loans has since condemned the assault.

Read the GBA statement below:

The Ghana Bar Association (GBA) has viewed with horror and revulsion a video circulating on social media in respect of an incident which allegedly occurred at a financial institution in Accra. The GBA is appalled that a police officer, whose primary duties include ensuring the safety of persons, should brutalise the very persons he is duty-bound to protect, with such impunity. The Bar condemns in no uncertain terms the reprehensible and cruel conduct of the police officer.The GBA would wish to empathise with the victim of the assault for the traumatic experience she underwent, and to stress that under no circumstance should any citizen or resident of Ghana be subjected to such cruelty.

The conduct of the police officer is appalling, despicable and disgraceful, and we hereby wish to reiterate the Bar’s condemnation, made on 30th June 2018, of persons who attack citizens or persons no matter the cause. We also wish to reiterate that the security of all citizens is not only a fundamental human right but it is also integral to ensuring the rule of law. Insecurity is a threat to the rule of law and undermines our democracy; hence it should have no place in our democratic dispensation.

Security officers who under the guise of maintaining peace and order attack, abuse and dehumanise citizens must not escape the arm of the law and victims of such brutalities must receive justice.

The incident comes at a time the police are under immense scrutiny following the allegations of police brutality from the Zongo community in Kumasi after seven men suspected to robbers were killed by police on the spot.