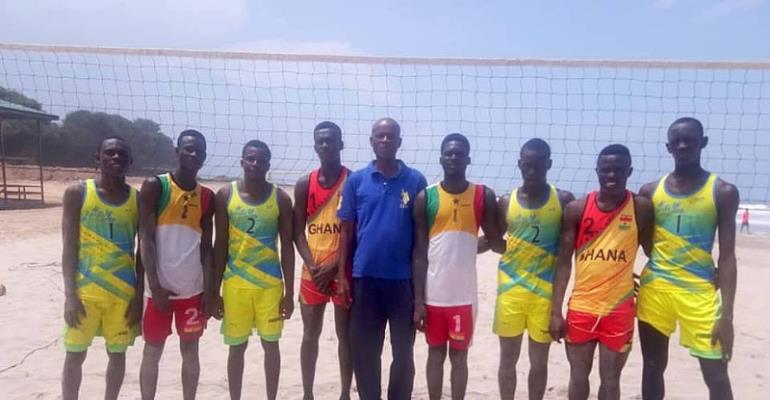 The Ghana Volleyball Association over the weekend hosted their Togolese counterparts in a Beach Volleyball competition at the Laboma Beach Resort in La. The contest was between the Togolese A and B pairs of Kpovon Daniel/Ariyata Ganiou and Samani Komla Wilfred/Kotoka Kofi Abraham.

Ghana was represented by Kelvin Carboo/Eric Tsatsu and Samuel Essilfie/Edward Nunoo respectively as pair A and B.

The Saturday encounter pulled a lot of crowd from the commuters at the Laboma Beach to watch the young men display a lot of skills and courage in the sand to keep the ball flying.

A total of twelve (12) sets were played over the two days (7&8/7/18). The Ghana pairs kept their dominion and control over their opponents who enjoyed the resistance they offered to the more exposed and experienced side.

Togo lost all the twelve sets played at a 2-0 margin with an appreciable set score.

The visitors left Accra on Sunday afternoon.
The two sides used this competition to finalize their preparation respectively for the Youth All African Games which takes off in the Algerian capital Algiers on the 18/7/18.

The Ghanaian contingent is expected to leave Accra on Sunday 15/7/18.

Champion Foods feted the two nations with a variety of local and continental food.