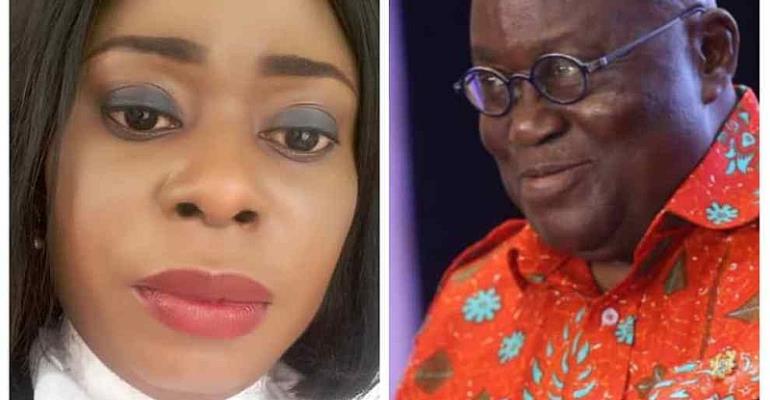 Human Rights Advocate and Feminist Activist, Lawyer Mary Ohenewaa Afful has stated that, Ghana’s President Nana Akufo-Addo is incomparable in the issues of Human Rights, in Africa and beyond. She made this statement in an interview on AB TV channel in Accra as part of a discussion on her advocacy for women and children’s rights.

According to her, Nana Akufo-Addo even before assuming the presidency had a lot to his name in terms of human rights issues and interventions.

The lawyer who had his book published in 2011 and titled “THE FUNDAMENTAL HUMAN RIGHTS AND FREEDOMS” dedicated to Nana Akufo-Addo, added that,  in almost all her research work into writing her book, she found the name of Ghana’s current President’s name and that motivated her a lot.

Nana Akufo-Addo from his early years has stood strongly for Human Rights. In 1979, he was the leading counsel in Tuffour vs Attorney General, a landmark case which fully established the doctrine of Separation of Powers and the Independence of the Judiciary, preventing President Hilla Limann from removing the Chief Justice Apaloo unconstitutionally. The case also established that any citizen can take action to defend the Constitution.

Over 20 years ago, he was the founder and first Chairperson of the Ghana Committee on Human and People’s Rights, which was set up during the PNDC Military Dictatorship to protect the civil liberties of Ghanaians.

Nana Akufo-Addo as the President of Ghana never relented his efforts in Human Rights as a subject matter.

In January, 2018, The President, Nana Addo Dankwa Akufo-Addo  launched the 70th-anniversary celebration of the Universal Declaration of Human Rights, with a call on all to ensure that the Fight for the Protection and Respect for Human Rights remain a constant one.

Speaking at an event to commemorate the anniversary of the Declaration, which took place on the sidelines of the on-going 30th Ordinary Session of the Assembly of the African Union, President Akufo-Addo noted that the Universal Declaration of Human Rights, since its adoption on 10th December, 1948, has been the basis of considerable advances in the Universal Protection of Human Rights.

With Africa having overcome several Trials and Tribulations, such as Slavery, Imperialism, Colonialism, Tyranny, and Dictatorship, the President indicated that the African people continue to chalk significant successes in advancing the Promotion and Respect for Human Rights in their Governance.

Among all these and other best reasons known to Lawyer Mary Ohenewaa Afful may have given her such confidence to adjudge the current President of Ghana Nana Akufo-Addo as the man that stands tall in Human Right works globally.

Lawyer Ohenewaa has therefore encouraged individuals and groups to be very cautious on matters of Human Rights and must FIGHT for their RIGHTS at all TIMES.

#Mary Ohenewaa Nationwide Advocacy Programme ( MONAP ) & Free Books Distribution on Domestic and Sexual Violence in Schools at all levels is her project to curb sexual violence, And also in Markets, Lorry Stations, Churches and Rural Communities on Property issues in Marriages and Divorce; and the need to make a VALID Will to prevent the non-application of the Intestate Succession Law PNDCL 111.

To support the Advocacy Programme and its Free Printing of more books and drinks or food items to give to the little ones, kindly make contact make with us on: