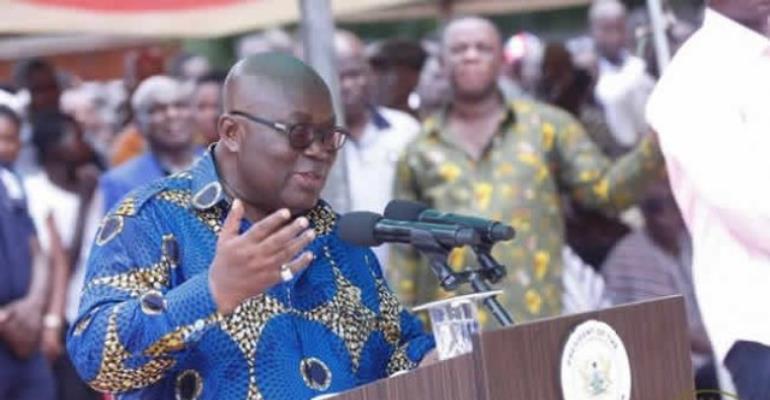 President Nana Addo Dankwa Akufo Addo says his administration has demonstrated true commitment in the execution of its flagship programmes and policies and will to this effect, prove critics wrong by implementing them to the latter.

Addressing a durbar of the Chiefs and people of the Bongo Traditional Area, the President said efforts are being made to galvanize the needed resources to pursue other initiatives.

On the implementation of the free SHS policy, the President said enrolment will increase next academic year, therefore more than 8,000 teachers will be engaged to manage the situation.

President Akufo-Addo was in Bongo as part of his two-day tour of the Upper East Region.

President Akufo Addo ended day one of his two day tour to the Upper East Region in Bongo.

Accompanied by ministers of state and high profile personalities, the President seized the opportunity to inspect some ongoing projects that are currently being undertaken by government.

Key among them was the 8 kilometre Bongo-Balungu-Namong-Zorkor road network.

The stretch which has since been awarded on contract and expected to take 12 months to complete poses a death trap due to its deplorable nature.

According to the President, road infrastructure was on his priority list and that adequate resources would be made to ensure its completion by close of next year.

He further expressed his government’s readiness to see to the rehabilitation of all minor roads in the area.

In response to numerous requests made by the Paramount Chief of the Bongo Traditional Area, Naba Salifu Alemyaruum, President Akufo-Addo expressed his resolved to ensure the speedy construction of a dam project at Ayopia, which is one of the few dams being constructed in the district to actualize the government’s One-Village-One-Dam policy.

On the free SHS policy, President Akuffo-Addo pledged to recruit more teachers in the next academic year to offer decent tuition and help bridge the yawning deficit in terms of student-teacher ratio.

Touching on Aviation, President Akufo Addo announced that the ministry in charge was working around the clock to construct an airport at the proposed site in Sirigu, a suburb of Bolgatanga.

The said airport, he indicated has been on the drawing board for years, adding that its completion will go a long way to address the challenges facing the transport sector of the region.

Another area that the President touched on was on improving the agriculture sector.

Here the president was emphatic on the outcome of the planting for Food and Jobs Programme, and hinted that more farmers were going to enjoy improved seedlings and subsidized fertilizers among other farm inputs this planting season.

He therefore called on all to take advantage of the gesture and support its implementation to make it a success.

The various Municipal and District Chief Executives were also there to grace the occasion.

The second day of the president’s visit will be in the Navrongo and Sandema.

On the itinery, the President is scheduled to inspect ongoing Navrongo-Chuchuliga-Sandema road works currently being undertaken by Myturn construction Limited.

He is also billed to facilitate a sod- cutting ceremony to commence the construction of an ultra-modern police headquarters for the people of Sandema in the Builsa North district. President Akufo-Addo and his entourage will later meet with the chiefs and people of the Builsa Traditional Area and go ahead to engage regional party executives.