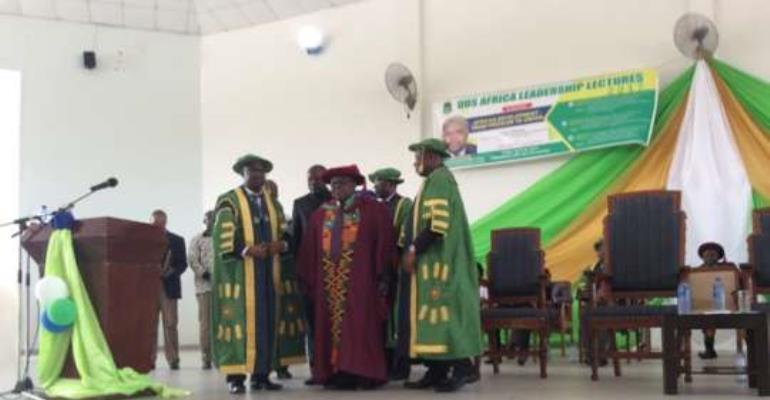 Tamale, April 29, GNA – President Nana Akufo-Addo has called on the University for Development Studies (UDS) to establish a Peace and Security Centre as part of efforts to ensure peace in the Northern Region.

President Nana Akufo-Addo said the Peace and Security Centre would undertake conflict management training to amongst others let people understand early warning signals to help forestall conflicts in the region.

Mr Salifu Saeed, Northern Regional Minister, who read a speech on behalf of President Nana Akufo-Addo at a special congregation of UDS in Tamale, said pockets of conflicts in the region continued to hamper efforts to bring development to the region.

The special congregation, which climaxed the fifth edition of the Africa Leadership Lectures, saw UDS confer a Doctor of Letters Degree on Mr Benjamin William Mkapa, former President of Tanzania for his commitment to fighting corruption and dedication to serving people.

A total of 222 graduate students including six PhD students who read various courses at UDS also graduated during the event.

The fifth edition of the Africa Leadership Lectures, delivered by Mr Mkapa, was instituted by the UDS in 2013 to contribute to a national and transnational discourse on productive leadership culture that will support and enhance African development.

President Nana Akufo-Addo said sustainable peace would go a long way to consolidate development gains in the region hence the need to ensure peace in the region.

The Northern Region continues to experience pockets of conflicts as a result of chieftaincy and land disputes, a situation which takes a toll on public expenditure as a lot of resources are mostly sunk into maintaining peace instead of undertaking development projects.

President Akufo-Addo also encouraged UDS to continue to roll out disciplines that would help to address developmental needs of the north and the country as a whole.

Professor Gabriel Teye, Vice-Chancellor of UDS appealed to the government to give clearance to the University to recruit qualified staff to strengthen its faculties where most staff members had gone on retirement.

Professor Teye said inadequate staffing at most faculties of the UDS was affecting its operations and appealed to government to help improve on infrastructure facilities of the University.

Mr Mkapa, in his acceptance speech, commended Ghanaians for their peaceful co-existence saying the recent peaceful general election in the country (Ghana) was inspirational making her (Ghana) the star of democracy on the continent.

He also commended UDS for instituting the Africa Leadership Lectures, which was helping to shape constructive leadership on the continent.