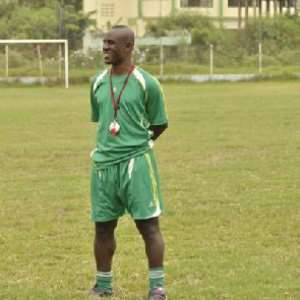 Deputy head Coach for Elmina Sharks, Felix Aboagye has heaped praises on Kumasi Asante Kotoko following their loss to the Kumasi based club in their match week 13 game played at the Baba Yara Sports Stadium.

The Porcupine Warriors beat Sharks by two goals to zero yesterday. Emmanuel Gyamfi found the back of the net on the 62nd minute before new signing Sogna Yacouba added what was the insurance goal on the 74th minute to secure all three points for Kotoko.

Elmina Sharks went into the game with high hopes after going on a good run of ten games unbeaten. Unfortunately for them, they were halted and brushed aside by a determined Kotoko team led by Coach Paa Kwasi Fabian. Kotoko’s win means they have now won two games in a row for the first time in the ongoing 2017/2018 league season.

Felix Aboagye addressing the media after the game said that the game was balanced where his team came into the game so many times and could have won but unfortunately they lost. The Ghanaian International, however, insisted that Sharks are not disappointed and are hoping they will be the victors in their next game.

He added that on the day, Asante Kotoko were a very good side and deserved to run home with all three points.

“We are not disappointed with the loss because Asante Kotoko were very good on the day and deserved to win the match. We are very happy for their team”.

Kotoko are now 6th on the league table with 20 points after playing 13 matches. Sharks, on the other hand, lie 7th behind Kotoko with 18 points and one game to spare.