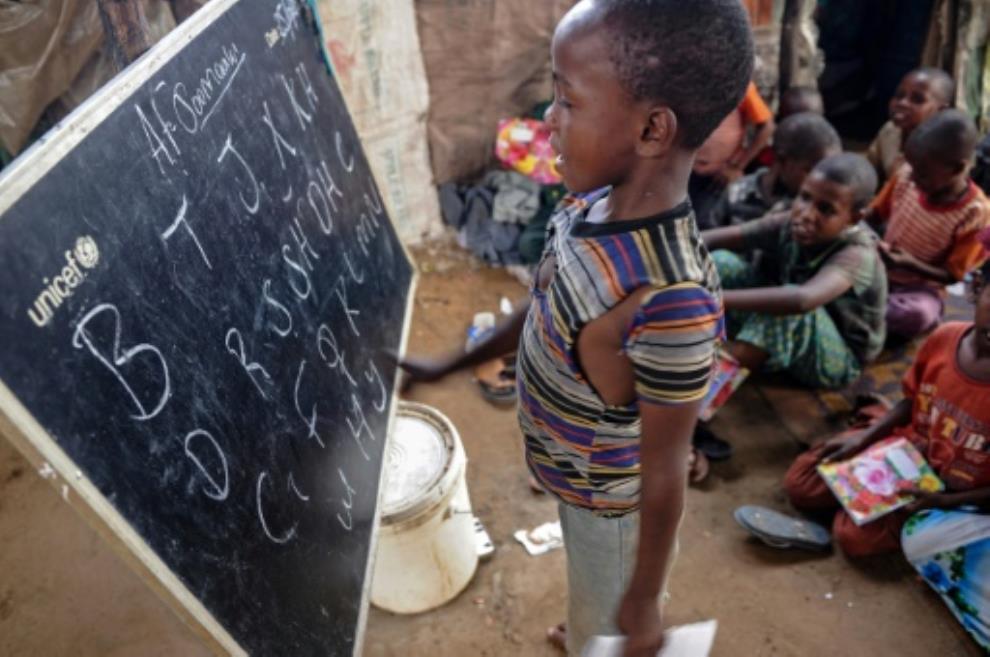 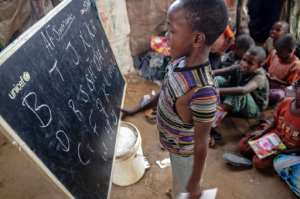 The children are taught reading, writing and maths. By Mohamed ABDIWAHAB (AFP/File)

Taking time out from their studies, a group of young student volunteers in Somalia’s capital are providing free education to children uprooted from their homes by war and famine.

Seven years after hunger and disease killed a quarter of a million people, and in the midst of an ongoing Islamist insurgency in Somalia, so-called IDP camps dot Mogadishu.

These squalid villages of makeshift huts for the homeless, called “internally displaced people” by aid workers, crowd the spaces between buildings and neighbourhoods in Mogadishu.

They are among the most destitute: landless, penniless and with little hope for their children’s future.

But an initiative by some of the city’s more fortunate young folk is offering basic literacy and numeracy skills to the displaced youngsters.

Most of the volunteers are students at local universities, such as Abdirashid Abdulahi, one of the group’s founders.

“After having seen, and studying, the existence of lack of government-controlled education centres for the destitute communities, we have decided, as academics, to assist our needy people at the displacement settlements in Mogadishu,” said the 20-year-old medical student.

“We have nothing else to give to these people, except our time to educate them,” he said.

Abdulahi said the group’s 30 volunteers are teaching 600 pupils aged six to 15 in four centres at informal settlements around the city.

“Nothing is easy here — some of our classes are held under trees or simple shelters — but we are happy because our morale, and that of the students, is high,” he said.

“All that matters is the positive objective we seek to achieve together.”

Education, like many other state-provided services, has been disrupted by decades of civil war. While private schools and colleges thrive in Mogadishu, they are only an option for the well-off few.

Religious school or no school

For the poorest, the only education is often provided by Koranic schools or madrasas where learning is limited to religious studies.

“I run a small centre where I teach the Koran and other Islamic lessons,” said Moalim Ali Derow, whose madrasa is next to a displacement camp.

He often waives the small fee for children of poor families from the camps. 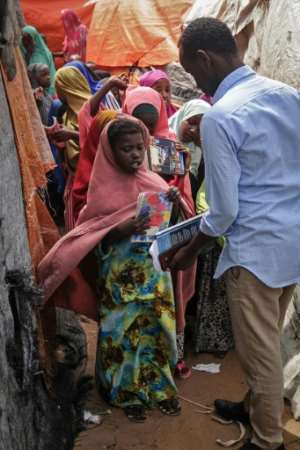 “The parents cannot afford to pay and most of the madrasas in the district teach students from the camps who cannot pay fees. We teach them for the sake of Allah,” he said.

The young instructors, some of them yet to graduate, are teaching reading, writing and maths, but in giving of their time freely they also demonstrate the importance of helping others, and of hope.

“We were lucky because our parents are able to pay our education but what about these children? Don’t they also have the right to education?” said Yahya Mohamed, a 25-year-old high school graduate about to begin a degree in public administration.

“Even if their families are displaced and have no resources, I think this is a responsibility for any educated person.”

Six-year-old Hasno Daud, dressed in rags, sits in the dirt beneath a tree clutching a pen and a book.

Despite her circumstances, her ambition is clear: “I need to study to become a nurse in the future, so that I can cure patients at the hospital,” she said.

Parents and community elders said the student teachers were doing a great job.

“We have really benefited from the opportunity they have given to us, to teach our children when we are unable to pay school fees,” said Mako Sheik Isack, 42, a mother of six living in Badbado camp in the south of the city.

Abdullahi Mohamed, an elder at Badbado in his 50s, says the students are picking up the slack left by the government.

“What these young volunteers are doing is really commendable. It is the responsibility of the government to help camps in proving basic education to children, but we don’t see that role being played well,” he said.